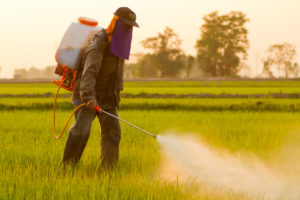 Bayer Pharmaceutical and Monsanto’s Roundup and Ranger Pro weed killers have been linked to cancer after a report from the World Health Organization (WHO) deemed their key ingredient, glyphosate, a “probable” carcinogen. Specifically, there appears to be a link between glyphosate exposure and developing non-Hodgkin’s lymphoma.  The manufacturers of these products have angrily denied that their products are dangerous, however, in the summer of 2020 they announced a settlement of the nearly 125,000 pending claims for 9 Billion dollars.  If you have been hurt by this product it is not too late to get compensation.

Our St. Louis-based law firm is currently taking cases on behalf of landscapers, factory workers, tree trimmers, agricultural workers and anyone else who has been exposed to Roundup through their work or at home. If you have been diagnosed with non-Hodgkin’s lymphoma, call our Roundup cancer claim lawyer at (314) 433-9131 to schedule a free consultation. We’ll see how we can help you get any damages to which you are entitled.

Roundup is a glyphosate-based herbicide originally produced by Monsanto, which was acquired by Bayer in 2018. It and other glyphosate weed killers are widely used by farmers, landscapers, gardeners, and others. The generic version of Roundup is called Ranger Pro, which is also manufactured by Monsanto.

Is Roundup Safe to Use?

There are conflicting views regarding Roundup’s safety. It’s the most widely used herbicide in the United States, but recent studies have linked exposure to roundup to certain types of cancer.

What types of cancer has glyphosate been linked to?

Non-Hodgkin’s lymphoma targets your lymphatic system, a critical part of your immune system. It starts when you body starts making too many abnormal lymphocytes, which are a type of white blood cell.

Signs and symptoms can include the following:

Who is at risk for glyphosate exposure?

Those who work around plants or vegetation have a heightened risk for exposure.

What other Monsanto Products Contain Glyphosate?

The most widely used and best known glyphosate weed killer is Roundup. However, Monsanto sells a variety of pesticides that use the same key ingredient. They are sold under a variety of product names, including Roundup and Ranger Pro.

One of the first glyphosate lawsuits to go to trial was filed in California and settled in August 2018. Dewayne “Lee” Johnson worked as a school groundskeeper who routinely used glyphosate-based products on athletic fields. In his lawsuit, he argued that his exposure to glyphosate through Ranger Pro herbicide caused him to develop non-Hodgkin’s lymphoma cancer. Further, he argued that Monsanto was liable for not adequately outlining and warning of the risks of glyphosate. At the trial, his doctors testified that he is not expected to live past 2020.

A twelve-member jury returned a unanimous verdict in Johnson’s favor. They found that Monsanto failed to adequately warn the public about the risks associated with Roundup and Ranger Pro. They awarded the plaintiff $289 million in total. Roughly $39 million were for compensatory damages, and $250 million were for punitive damages. These included $37 million for non-economic damages, or $1 million for every year his life was cut short by the cancer.

Our Personal Injury Lawyer Can Represent You In Roundup Lawsuits

Our law firm is currently taking cases on behalf of landscapers, factory workers, tree trimmers, agricultural workers and anyone else who has been exposed to these dangerous pesticides through their work or at home.

If you have been diagnosed with non-Hodgkin’s lymphoma, call us for a free consultation. We’ll see how we can help you get any damages to which you are entitled.

"Our family is so appreciative of the expert legal representation we received. Because of Gonzalo's knowledge of the complex legal system, he was able to bring our lawsuit to a successful conclusion. We would highly recommend anyone who has similar concerns in health adjudication issues to seek out the services and expertise that this law firm has to offer."

Tell Us About Your Case