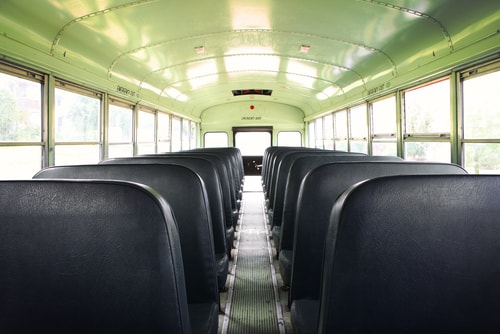 School Buses – Where Are The Seat Belts?

Ever wonder why most school buses do not have seat belts? Federal law requires seat belts in buses under 10,000 pounds. However, the only buses under that weight limit are the 12 seater buses that are infrequently used. 80% of the school buses are the long, standard yellow buses. Where is the law for these buses?

The NHTSA requires increasing the height of the seat backs to 24” (from 20”). It leaves the individual states to decide on whether or not to install seat belts on larger buses. 6 states have passed some type of seat belt law. 12 have introduced bills. But as of now, California is the only state with a law that requires lap and shoulder belts on all new buses.

What’s The Hold Up?

While, law makers and safety experts believe that states will move towards adding seat belts, they are impeded by cost. Funding is the biggest barrier for most states to change their laws. Most proposed laws pertain to new buses only as it is very costly (close to $10,000 per bus!) to equip existing buses with seat belts.

As far as safety, most buses are designed to use “compartmentalization” as their safety measures. The closely-spaced padded seats of the bus are supposed to act as protective barriers. Furthermore, the seats have no exposed metal. (The Missouri Department of Secondary Education says there is no safer mode of ground transportation.) Of course, that does not help in a rollover or side-impact situation.

School bus accident fatalities are very low. – less than fiver per year on average. The NHTSA estimates that this number could be cut in half if lap and shoulder belts were installed in all school buses. However, they also point out that adding belts reduces potential capacity. As a result, some student might end up seeking other, more dangerous transportation.

Opponent of this measure claim that seat belts may slow down or prevent an evacuation of a school bus. They also argue that kids may actually injure themselves or others playing with the seat belts.

Despite the drawbacks, The NHTSA feels that eventually more and more states will begin to spend the money and install the safety belts. However, it will take time (and money!) for this policy shift to occur.

Missouri is not one of the six states that have introduced a seat belt bill, however it has been investigated here – especially after the 2013 bus slide that occurred in Kansas City, MO, injuring 22 Pembroke Hill students. (Pembroke Hill, a private school, now has seat belts on the buses that they use for athletics and field trips – probably one of the first and only schools in the region with such a requirement.)